My life as an English Major 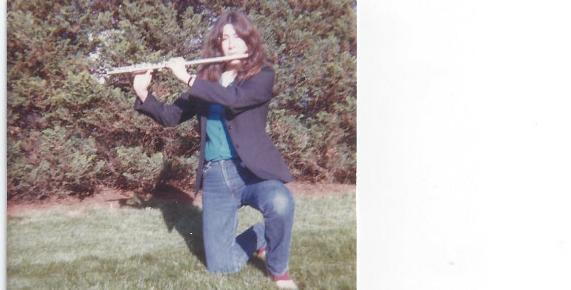 On your I-Phone, you no longer have to live in the present. So, incontinent with nostalgia and the path not chosen takes its toll. These thoughts came to mind when I clicked on Claude Bolling and started to listen to his "Suites for Flute and Jazz Piano." It was bad enough I had to go to South Brooklyn. But to have to travel to Brooklyn with all my alters in tow, seeking to soothe myselves on the idle hour trip. I used to play the flute part (badly, like everything else I have done) with either my flute teacher, Greg Tuleja, or my ex-roommate, the WFP, who played the piano part. When I took lessons, I got to play the jazz part. It was exciting, the staid flute swinging out the melody line with the piano getting to be the straight man, so to speak. But on the recording, the flute played it straight while the piano popped out and swang its hips down the path of least resistance. I remembered, in the days before grad school, alone, not wanting to be in the apartment, I would run over to Patelson's and look for flute music, pretend to be a musician, eavesdrop on conversations, feel frustrated with how little I could afford to lay out for new sheet music. It wasn't even a matter of Dolce and Gabbana or even K-Mart. After my half of the rent, flute lessons, bus fare, food, laundry, student loans, there was nothing left for idle music sheets, let alone lacy lingerie.

As I may have mentioned, becoming a psychologist was not a lineal path, where I popped my head out of Sylvia's cervix, looked around at the motley crew, and cried, "I'm gonna be a psychologist." Mostly, I cried.

At first, when I was very concrete and in second grade, I wanted to be a nurse. Girls could be nurses. Nurses got to wear uniforms. I wanted to wear a uniform. Hic, hoc, haest. I used to put on my nurses uniform (a lab coat that a neighbor gave me) and ride my bike like a visiting nurse after school. But I didn't like science as I was taught it, so...go fish.

When I was in fifth grade, I read Viscott's "The making of a psychiatrist." The light bulb turned on. I knew I could never be a psychiatrist--I just never had the belief that I could succeed in medical school. But a psychologist just needed grad school. I thought it was doable. Somehow, I intuitively felt it would add meaning to my life and it would make up for my being stuck in Unfunky all those years, a Jewish pariah in the Diaspora. But, despite this longing to add a Ph.D to my name, other occupational options rotated around my mind like a spit. I wanted to be a journalist. No, I wanted to be a political scientist. No, I wanted to be a psychologist. But always--I wanted out of Unfunky Scummedrine. That was a constant. No, dear reader. Scummedrine High did not ever offer an occupations fair. All my ideas were spun fantasies, out of books. Journalism arose from Nelly Bly and Jacob Riis and the bintel brief and the VILLAGE VOICE. Poli sci--well there's a real head scratcher. I couldn't tell you to this day from whence it originated.

When I went to SUNY-B, I was pivoting in the political science direction. I had no particular occupation in mind. I just enjoyed the coursework, a mixture of history and government. Sometimes, as in "The Federalist Papers," both.

But then, right after Labor Day, 1978, classes began. What a long, panicky-anxious feel your heart in the throat filled day. My European Political Systems class: 150 students. My Classical Literature class: 150 students. My Intro to Psych Class: 500 students. I just focused on the "here and now." Just get through the class. Each class was in a large or small amphitheater in Classroom Wing. I graduated in a class of 322 at Unfunky High. My classes at Unfunky High ranged from 12-25 students. OMG--what was this? I was not prepared for this sort of competition. And competition not from the Downstate Equivalents of Unfunky--my classmates were from Stuyvesant, Bronx Science, Midwood, Brooklyn Tech. They seemed to poised and at ease. As if they had seen this material before and had been habituated to it. I just had no idea how to be in a class where the teacher made no eye contact. Where extra-class contact was with their TA. My two roommates were all bland and non-commital. One graduated from Dewey; the other from a yeshiva in Long Island. They just seemed bored with their classes. We didn't talk about our first days. Even the bone-grueling task of registration, which involved standing in an extraordinary long line in the gym, as if we were hoping for an audition for Binghamton Idol, but only filling out Scantrons for courses, hoping to hand them in before the big board registered they were full and no longer taking in students. Neither of them volunteered to feel anything other than "Hi, ho, these are the classes I'm taking." They possessed a nonchalance which I now realize must have been exagerrated. I guess they were afraid to be enthusiastic or emotional or panicky. They just chose to be chill and I took my lead from them. Looking back, surely nothing at either school could prepare them to be with hundreds of students in each class. Surely, they must have felt anxiety. They both modeled affectless states with a vague cheer. Don't admit to anything that had to do with anxiety. Or feelings of any sort. And, I came from that sort of background. We had no feelings. My parents didn't argue--they had loud discussions that could be heard for miles, in those days before air-conditioning. They weren't anxious. My father didn't have PTSD. My brother wasn't a quivering bowl full of unsettled anxiety searching for a security blanket. So, I just put one foot in front of the other and didn't ask any questions about my fluttering stomach and the looming, dooming always nocturnally occuring panic. the scream I kept forcing down in my throat, so wanting to get out and shriek, "I can't, I can't. It's too much." But I couldn't let it out. When the only choice between Anxiety and Bingoland is home to your parents, whom I frequently referenced to others as "those damned peasants," where everytime I did any verb-like event, it was always, "Where are you going, when are you coming back, who are you going with?" You choose Binghamton. Even though when the sun set, you felt like crying for their lack thereof and hated yourself for this feeling, which you then fled by going to the library and reading the required texts.

So I rotated again. Poli Sci required three economics courses for the major. Goodbye Poli Sci--I didn't think I could survive one course of this dismal science, let alone three. Psych immediately went out the window--500 for the Intro, 300 for the following courses, 50 or so in the Senior Seminars. Psych worked on competing against others, on multiple choice tests. You were evaluated strictly on your grades. A person with a 98% was a better, more worthier person than a person with a 97%. And the person with the 99% was the best of them all. Scores, scores, scores. You as a person were anonymous.

And I didn't necessarily bewail being anonymous. I was ambivalent about having relationships with professors. I wanted relationships with students. I wanted love. But, most of all, I wanted to survive my time there to earn a bachelors. What were my choices? I already had to take out loans for 1/2 tuition. Private school was not an option--period. I had little idea that private schools could offer small classes. But that mattered not. There was no money. Scholarships were not considered--transfer students didn't see that sort of financial aid. My only choice was another SUNY--same difference. Or Rutgers--I would have to live with my parents and commute. See the first part of this essay for my conclusion on that.

But English lit--okay, so there were 150 in the class. But I enjoyed it. It was a natural conclusion--I was always a bookworm getting lost in a book. So I would no longer be found trodding the primrose paths of subliterary works. And, as a bonus, I found that after that first semester, English classes were only about 20-30 students. You could participate in class. You could get to know the teacher, without the intermediary TA. I continued in Poli Sci for a while. But the classes never got smaller than 150. Poli Sci was fun and some of the professors were quite the "hail fellow well met" sort. But geez--talk about arrogant and contemptuous male chauvinists.

So, I majored in English and General Lit. I just threw myself into the sensitive, artistic light. I took up the flute, admiring as I did musicians. Piano was no longer an option for me, because it meant competing with my brother, the piano genius, and this rivalry has been an issue I have never explored. Not in all my long years, some of them in the presence of psychologist. (No one even wanted to explore this relationship, once they satisfied themselves that there really was no incest or physical/emotional abuse to bother about. Yawn). So the flute, which I took up at age 19 and continued with until age 25. By the time I started graduate school, this became a problem. The work of graduate school took up so much time, that I couldn't practice to the extent I wanted. Add to that, the issue of finding a suitable teacher. After Greg Tuleja left to take a full-time job, I couldn't find anybody with whom I felt safe. The first one was a raging narcissist, who took long phone calls frequently during my lesson (meanwhile, my lesson never went beyond the hour, even though his attention rarely went beyond the first quarter). The second one looked like a cross between Mr. Toad and Herve Villechaise and gave lessons in his apartment in a fourth-floor walkup in an area where I didn't feel safe. The last one was a lesser narcissist in a fifth-floor walkup in another area where I didn't feel safe. When he went to Europe to tour, I just gave up on the whole idea and focused on my studies. Years later, after the death of Mary Travers, I found my muse and studied guitar for a while, until my guitar teacher inexplicably abandoned me. I never had the heart to find another. In my alternative life, which is 90% percent fantasy, I am a musician who can combine music with psychology. I am a psychologist who wrote the hit lyrics to the musical "Oedipus Wrecks," which is smashing one record after the other on Broadway. I am also gorgeous, financially secure, a femme fatale on the order of Veronica Lodge, and can sing well.

At least I got out of Unfunky.