Sam Surprises (in photo above, my father is in the middle) 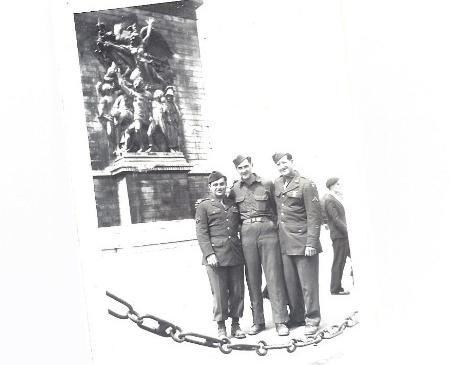 As I mentioned in a previous post, my father was non-verbal, relying more on facial tics and glowering expressions to communicate.  Frequently, when frustrated, he strode out of the house.  My mother was unfazed but I was not.  It wasn't until I was a teenager that I realized he never took his car with him, so he would have to return at some point.

My parents met through a mutual friiend.  My mother is 11 years youngerr than my father, but she skipped two grades in school.  Most of her girlfriends were a few years older than she.  My mother was attending Brooklyn College and was friendly with a girl named Marlene.  Marlene had two brothers--one who lived at home, like her; the other was a photographer for LIFE (or LOOK) magazine and was not around.  My father rented a room from this family and was friends with the brother (Stan) who still lived there.  Both my father and Stan were veterans of World War II.  My father, after discharge, was in hospital for a while, then tried college (Plattsburgh).  He flunked out, probably because of undiagnosed PTSD and came back to Brooklyn, where he was a civilian engineer, working in the Brooklyn Navy Yards.  My father was 29 by then, tall, thin, swarthy, with thick curly hair and slate blue eyes.  Marlene thought she would play matchmaker and arranged for my father to be around when she had my mother over.  Six months later, on December 18, 1954, they wed.

Ah, but I digress.  Marlene and Stan (and my father) lived in a big Edwardian house in Borough Park, Brooklyn, owned by Marlene's father.  Neither Marlene nor Stan liked him.  My mother was obvious to the tension in the house.  I don't know what the animus was about.  Allegedly, he told Marlene that if she continued studying violin, he would pay for her to go to any college.   Marlene refused those terms, hence, Brooklyn.  I have no idea why this was a source of such sourness that she apparently didn't talk to her father.  I have no idea what Stan's problem was.  At any rate, my mother was telling me this story one night.  Almost everything I know about my father's life comes translated through Sylvia.  One night, Stan was so angry at his father that he grabbed his service revolver and attempted to shoot him.  My father ran in, said, "Stan, you don't want to do that," and grabbed the gun away, defusing the situation.   I don't know why I love that story.