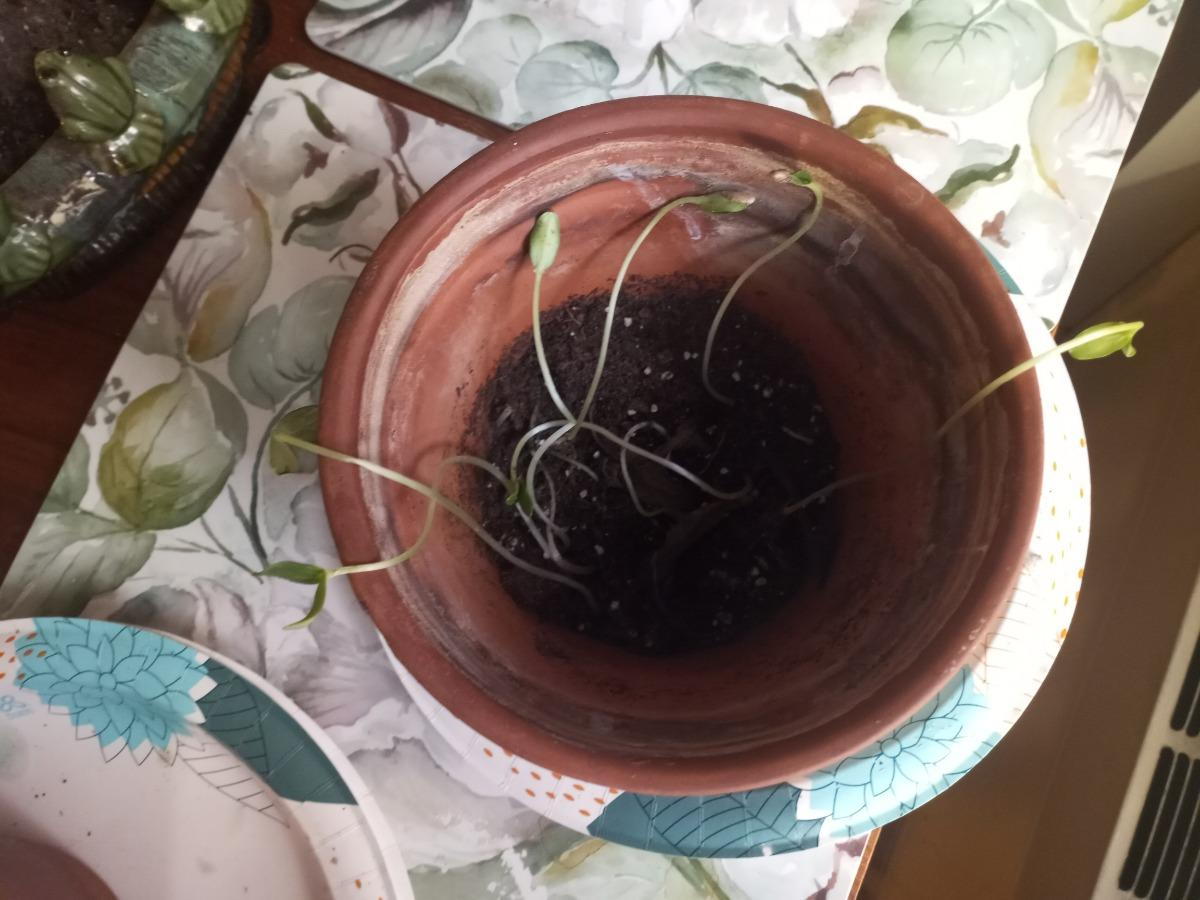 So here are the future hamis, sprouting in a pot of their own. This is exciting.  Nothing I have ever planted as a seed has ever come up, let alone sprouted.  How far will it go?  Will I have to buy each of the sprouts a pot of their own? Will I have to give them the apartment and find some place for myself?  Or will it come to naught and they're dead by the weekend, like most of my plants?

Tallish, willowish, beautifully lithe.  Elvish almost as they bend and curve about the pot, doing everything but singing foolish songs.  Nice little place they have there.  Shame if anything should come to spoil it.

But death comes to all of us.  We don't know when or how or why.  Is it like that for my plants.  Do they have a will to live?  Do they have a sense of what is to come?  As Bilbo said, "It's a dangerous thing, leaving the house."  Apparently, they didn't know in BagEnd that the most dangerous place is the home.   I always think about Pert Kelton at such times.

Pert Kelton was the original Alice on Jackie Gleason's HONEYMOONERS.  She was an angular, rawboned Alice, the type of woman who looked like she scrubbed floors on her knees to send her children to college.  She looked like someone who ended up the wife of an impecunious bus driver.  But Pert during the Depression, like most Americans, flirted with the local communist party.  And during the Red Scare of the 1950's, when HUAC came for her, Gleason saw her as excess to cause and scuppered her.  And Audrey Meadows became Alice, a woman who glowed with such vitality and youth and competence one wondered what Ralph had on her to keep her?

But Pert floated.  She did Broadway and movies.  She was the original Mrs. Paroo to Shirley Jones'  Maid Marian, Madam LIbrarian, if you don't mind me saying.  And certes it is that she looked more rested and peaceful, glad she gave Iowa a try.

And then one day, age 60, she went for a swim, had a heart attack, and drowned.  Was she aware of what was happening, but by the time she realized she was sunk, she was?

I think of this because every night I go for my lane swimming at the Y.  Back and forth, back and forth, like a rat in a watery maze, busy in my head and my body.  Could it happen to me, there in a pool full of swimmers and lifeguards?  I'm so tense, though the Jacuzzi is open, I don't avail myself of it, afraid I will blow up my BP and stroke out.  One can do all the right things and yet, naught is guaranteed.

I tell no one of this.  I'm afraid a psychotherapist, more concerned with checking all the boxes, will see my morbid musings as suicidal ideations, with a plan.  It's not.  These are uncomfortable thoughts and naught will thank me for sharing them.  So I don't.  And if I can't be free with my thoughts, I don't want to talk to anyone.

From melons to mortality. It's the last scene of HAMLET.  Death take all.  Imagine what a check lister checking boxes would make of Shakespear.e.  Instead of bestowing accolades, they would betake him to Bedlam, at hie haste, despite the warnings by Rosenkrantz (or Guildenstern).  In England, they're all mad, so naught would notice another one.