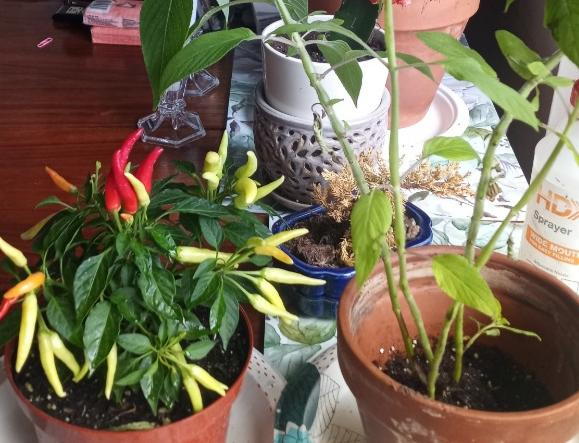 Last week I decided to stop throwing my energy after the Wandering Jew and start anew.  Where else does a Jew start anew but to perambulate down to Union Square, home of the Jewish labor movement and creator of such megastars as Emma Goldman.  Now, the only laborers to see are the farmers and their daughters, the fishermen and their shoes, and the deer hunters.  Plus, assorted bakers, brewers, and beekeepers.    There I purchased a pepper plant and a pineapple sage plant.  Let's see how that works out for me.

I believed that the pot that Piny Sage was planted it was a scooch too small.   It was about 3"x3", the type of pots that you put a cotyledon seed into in first grade to see how it sprouts.  Mine never did--pretty much a foreboding for my future.  I have never sprouted myself, and it seems any future sprouting is highly unlikely.

The interesting thing is that a month ago, I was so into the Hami melon, a sort of Chinese honeydew, that it bordered on the obsessive.  After my local fruit and veg guy stopped selling, I went as far south as the East Village H Mart , which, alas, had none nor had ever heard of it, even when I googled it and showed them the photo.  I bought what they called a Korean melon (all deep yellow and striped.  According to google, it is related to the cucumber and tastes like a blend of pear and cucumber.  Alas, I only tasted the cucumber.  But I still had half of a hami left.  I scooped out and dried the seeds and put them in them in the pot formerly occupied by the Jew.  Nothing.  Two weeks elapsed and I put in Piney Sage.  Today, I went to chat and noticed that there were several sprouty things on the pot's periphery.  "That's not a party of Piney Sage."  I lifted out Piney and the sprouts emerged.  So I repotted Piney and tended to the sprouts.

More to come.  Or knowing my green thumb, perhaps less.