Not inspired by the Tolkien exhibit: The books are many other stories 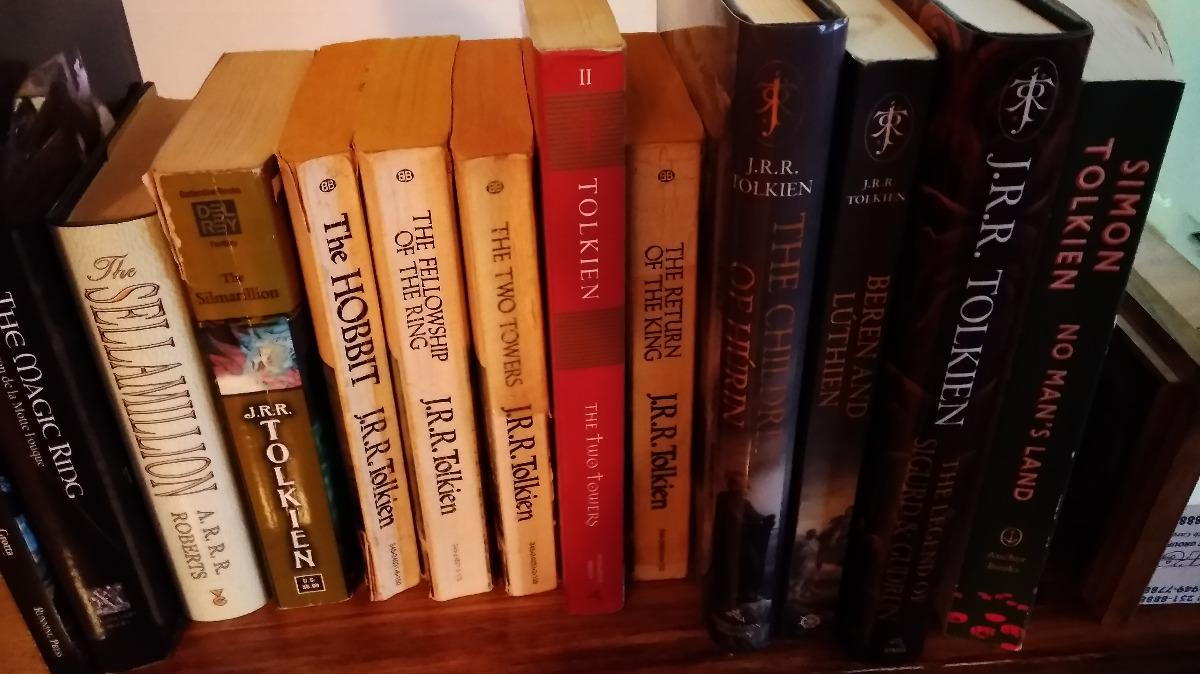 Keats saw a Grecian urn and wrote an ode.  Yeats viewed Brueghel's depiction of the fall of Icarus and wrote a gorgeous poem, starting, "About suffering, they were never wrong."  What a hook.  I went to the Tolkien exhibit at the Morgan Library and can only say, "It's about suffering."  What a crook.  Suffering:  First, you have to stand in a line to get into the museum.  Then, you stand in a line to get into a Tolkien exhibit.  Then,  you stand in a line to reach the exhibit (that's the longest).  Then, the whole exhibit is about lines.  I remembered whole sections of the Hersey book, "My Petition for More Space," a dystopian novel I read in high school, which is spot on, if you live in NYC.

I have to say, it was interesting, the little piece that I saw.  I saw photos of young JRR (that's Ronald to you) with his younger brother. I learned that his father died when he was 4, his mother, when he was 12.  I learned that after his father's death, they returned to England from South Africa and settled in a rural area, which was the model for his Shire.  I learned more details about his romance with Edith, the model for Luthien in his lay.  I learned that his always yearned for a big family, having been orphaned at a young age.  I learned about his service in WWI, and how "The Hobbit" arose from his stories to his children.  How after "The Hobbit" was published, his editor asked for further stories about hobbits.  How, 12 years later, after Air Warden Service, etc., "The Lord of the Rings" was published, to low expectations.  It wasn't a children's story and it was quite dark and complex.  And, it was box office boffo.  Despite that, Tolkien didn't want to be known for hobbits but for his saga of the creation of the world, "Silmarillion," which wasn't published until after his death.  And despite his distaste for the hobbits, that's what Jackson made movies about.  Not the SIlmarrion.

The exhibit did set me to musing.  Like Frodo, Tolkien was an orphan.  Despite that, Frodo remains an enigma.  Sam takes on more and more of the author's yearnings--the desire for a quiet life, a big family, a bit of a garden, daily tea, etc.  I still say that in Book Three, the author wants to do away with Frodo, and he becomes less central to the narrative.   It is Sam who gets Frodo up the mountain, Sam who urges Frodo to cast away the ring.  Frodo is just a shadow, who in the end cannot cast off the ring.  All of Sam's urgings, his idealisms, his desire for the shire will come to naught.  It was Gollum who gets him to fight for it, and Gollum who rips the ring off his finger, then, off balance, falls into the pit and does an unintended good, despite himself.  There's a lesson in that, though I cannot put my words to it.

Long ago I wrote this poem.  It's about Tolkien's influence on me, but mostly about me, I suppose.  I read it at a poetry slam in NYC.

No Thanks to JRR Tolkien

I would tell you I'm insane

What do you care if this be truth or a parcel of lies?

And for your purposes--what matters the state of my mind?

I'm trying to return to my own private shire,

a refugee, the Jew doctor who'd been invited to Gondor

Privileged to see their madman, hear his screams,

Ultimately, unbelievably to, feel his rejection

And I tell you:  the horselords never came:  it was all a pretty story

I grew increasingly weary of hoping for rescue

Of knotting my fragile silken ropes

There came no comfort from the hollow ones whom Gondor hallowed.

To save myself, I imagine a life I might have led

Had I not been born Sharon Kahn, but a great shieldmaid instead.